Scout Got Out Again

17 “When he came to his senses, he said, ‘How many of my father’s hired servants have food to spare, and here I am starving to death! 18 I will set out and go back to my father and say to him: Father, I have sinned against heaven and against you. 19 I am no longer worthy to be called your son; make me like one of your hired servants.’ 20 So he got up and went to his father.
“But while he was still a long way off, his father saw him and was filled with compassion for him; he ran to his son, threw his arms around him and kissed him.

Last weekend we had our neighbor and her son over to play in our backyard.  When they left, they exited through a fence gate that is seldom used, and...you guessed it...it didn't get latched back.  I thought I checked it after they left.

Well, apparently not.  Scout escaped again last night.  That's right, again.   Since we've been living in this house, she has bolted through the garage, or taken advantage of the almost shut side gate more than once.

She's fairly content to remain within the confines of our (relatively) spacious backyard. However, like every other curious creature (including some humans),  if given the opportunity, she likes to explore.

I noticed that Scout was not on the back porch last night, but I figured she was chillin' under the kids' sliding board or under the elevated, raised bed garden, as she has been known to do before.

This morning Wendi informed me that the side gate was open, and Scout was missing.  I sort of halfway quickly got dressed, realizing that she could be anywhere, and that I might be embarking on an extended search.

Just out of the door, Wendi informed me that someone had posted on the neighborhood facebook page that they had found a black lab.  She had replied, but had not received any response, yet.

Given that it was 8:30 on a Sunday morning,  my crazy looking bedhead, no decent looking hat to don, and no address of the person who had posted the notification,  I decided to take a shower and wait for a response from Scoutie's rescuer.


Is that how God thinks about us? Does he say, oh, Kevin got out of the fence again...he's probably safe, I'll just wait until a more appropriate hour to go and get him back?

NO! It says in God's Word that He will never leave us nor forsake us.

8 The Lord himself goes before you and will be with you; he will never leave you nor forsake you. Do not be afraid; do not be discouraged.”

Imagine a mile long leash. God always knows where we are, and is always longing (yearning) for us to return to Him.

Like Scout, my natural inclination is to explore what lies beyond.  However, relying on God's mercy and grace,  I am attempting to learn how I might overcome that inclination.

The allure of sin (the temptation) will always remain while I am walking around here on Earth. The challenge I've accepted, is to get to the point of, after having seen the open gate of temptation, choosing to not go through it...NOT TO EVEN PEEK THROUGH the opening, realizing that what lies beyond has already been deemed unsuitable by my Master.


Wendi and I will get Scout a reflective collar with an ID tag on it so that contacting us will be easier, which will make for a quicker return to the yard.

This is also a significant part of my journey: to be identified more clearly as a child of GOD, so that when I do drift away, I am quick to return.  As a byproduct of working to improve the integrity of my Christian identity, I will be better able to resist temptation.

I was not mad at Scout, nor did I punish her for escaping this morning.  I realize that if given the chance, she will venture out.  I'm just glad that she's back home safe and sound with us tonight.  And I rest in the thought that she should always return (eventually) because we love her and consistently take care of her every need.

Likewise, God will not be mad at us, nor punish us when we sin.  He realizes that given our carnal nature and free will, we'll often venture into sin.  He's just delighted when we repent, and return to Him.  And just knowing how much He loves us (enough to send His only son to bear the burden of all the world's sin), should be enough to keep us close by the One who consistently takes care of our every need.

Thanks be to God for Scout, for the wisdom I've gained through life with her, and for the continual growth HE is granting me as I seek to live more fully for Him. 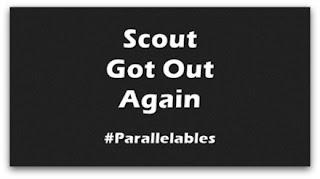