Can God use this blog post to further His kingdom?  Yes.

Should I be concerned about publishing this particular post, since it contains what appear to be disjointed story fragments (not ready for publication)?  No.

The rough drafts of too many #parallelable posts are sitting on the backside of my blog...(wait, who's blog?)...that is, God's blog.  And it's time to unleash the inspiration, as it was shared and worry about piecing them together as the Spirit leads.

So, without further ado...

9 “And you, my son Solomon, acknowledge the God of your father, and serve him with wholehearted devotion and with a willing mind, for the Lord searches every heart and understands every desire and every thought. If you seek him, he will be found by you; but if you forsake him, he will reject you forever. 10 Consider now, for the Lord has chosen you to build a house as the sanctuary. Be strong and do the work.”

"Your eyes saw my unformed substance, and in Your book all the days (of my life) were written before ever they took shape, when as yet there was none of them."


"Be determined to follow His lead all day, and you will enjoy every day of your life."


"God allows us to stray from Him, hoping that we will return to Him. If it requires, He will allow us to suffer the consequences of our chosen sins."


In the shower, the Spirit instructed:


""You can turn Your back on God, but I am still there. God desires a whole heart, without lustful indulgences.""


Post shower: Holden had head butted MK as she was trying to give him a hug. (Lesson in itself)

While Wendi was telling Holden "we don't head butt" and MK was attempting to describe (to Wendi) what had happened in detail...I heard Sly and the Family Stone's "I want to thank you for letting me be myself, again (ignoring Sly's preferred spelling for simplicity's sake) " coming from the radio in the living room.  I don't think it was coincidence.

We cannot fully love God with personal gratification on our minds and in our hearts.


In fact, shortly after I asked God to show me the things in my heart that were keeping me from receiving His full glory, and He gave me the revelation in the shower, I was eager to get out of the shower to write down what I had heard so that I could share it later on the blog. Was this a "grab and run" attitude?

I was telling myself that I needed to write it down ASAP so that I would not forget it (and in order to tell it exactly as it was received).

But, how quick are we to depart from the place where we received God's glory, after we receive it?
That is not the loving relationship that God desires.


This "wham bam thank you ma'am" approach to serving God ends up being more about serving ourselves. And it is the answer I was seeking.

That is what is crowding my heart...the eagerness to write for God is at best crowding and at worst countering my ACTUAL effectiveness at serving Him.

Meanwhile, MK is struggling with yelling at Holden when he does things that she thinks are being overlooked by us (the parents) or that he is not hearing.

She was playing cars with him, while Wendi was in the living room with them. Holden did something(?), and MK began exclaiming with crescendo, "Holdie, HOldie, HOLdie, HOLDIe, HOLDIE!" In rapid succession.

Wendi has been trying to break her of the habit, and once again explained,"OK, when has standing there yelling at him ever gotten you anywhere?"

I'm sure there is a correlation in that.  Am I merely saying things out loud (on this blog) because I think there are things that we (myself included) are not hearing from God?  Or worse, am I saying them out loud in order to make sure God sees me trying to do the right thing?

Either way, it's the wrong motivation.


When will we learn that we cannot do anything to win God's favor?  His unconditional love is ever-present, and we need only to turn to Him in humility and gratitude.

Thanks be to God for this continuing revelation. 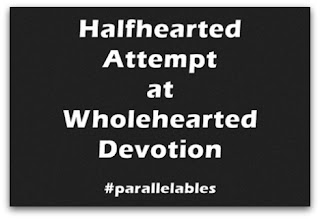